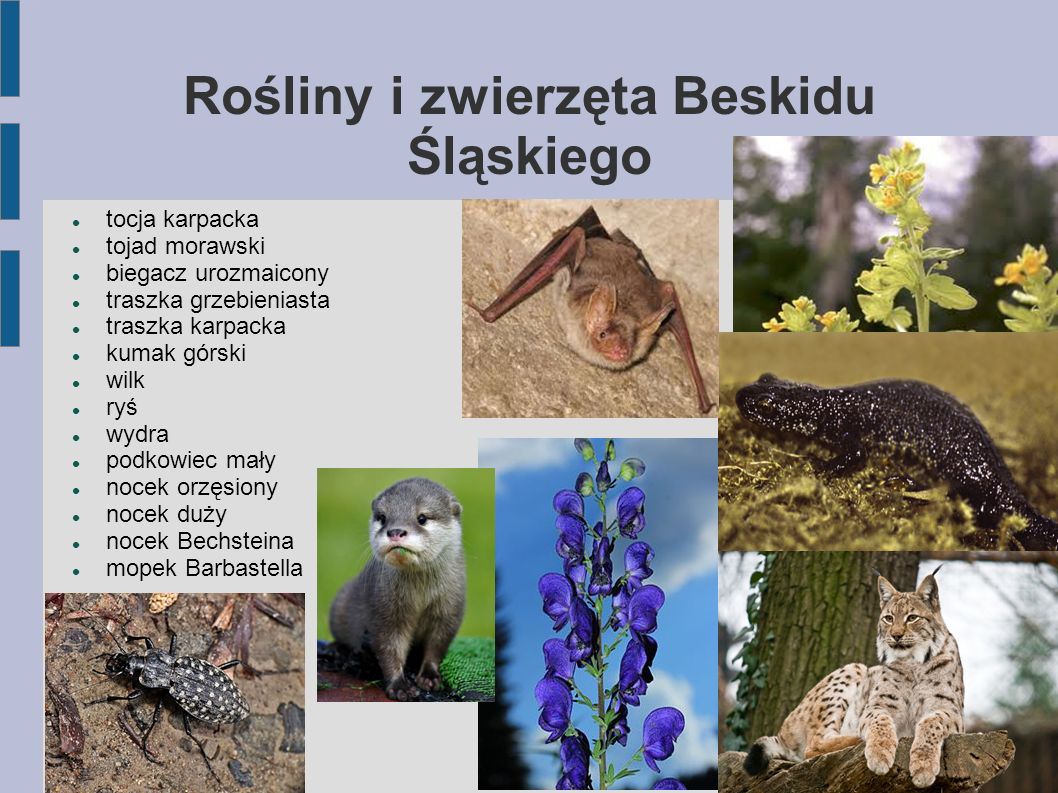 Animals of the Silesian Beskids

The animal world in this area is relatively poor - this applies especially to all larger mammals and birds. A significant number of species, formerly not commonplace here, it has completely disappeared in recent years 100 years. The reason for this phenomenon is - as in the case of the degradation of plant cover - intensive human activity. The irrational extermination or catching of certain animal species also contributes to the impoverishment of the fauna.

After the great predators in the Silesian Beskids, only highlander "godki" and memories of hunters remain, recorded in old chronicles. The last wolf was hunted here in. 1856, the last bear was shot in the Barania Góra massif in. 1862. The last wildcat was hunted in the Vistula Malinka in 1902 r. The last lynx died from a bullet in the 1980s near Istebna *. Since then, until recently, none of these animals were found in the bands of Stożek * and Czantoria *, recently, however, in E. parts of the Silesian Beskids. a bear migrating from Slovakia appeared several times, a w 1995 r. the presence of a lynx and a small pack of wolves was found in the forests of Barania Góra.

Smaller predators, after the disappearance of otters and pine martens, they are represented only by a fox, coward and weasel grace. Of the deer, there is a large number of roe deer, deer is found much less frequently, w pd. part of the band. Wild boars occur throughout the discussed area in several migrating herds ("Wathach"), however, they sometimes cause significant damage to higher-lying crops. The hare is common among rodents, living in the lower parts of the mountains, within range of fields and pastures. There is also a large number of squirrels of the Carpathian variety, with dark brown fur. Of the small mammals, the common hedgehog should be mentioned, several species of pilchidae, velvet shrew, voles and at least four species of bats.

Silesian Beskids, lying at the meeting point of faunal influences from the north and south of Europe (the nearby Moravian Gate), and also from its east and west, has a relatively rich avifauna. Admittedly, the last three golden eagles and the last two eagle owls were caught in the "iron" in the Vistula * in the years 1900-04, however, we also meet a common buzzard here, hawk, krogulca i pustułkę. The tawny owl is a common species of owls, less often - especially near buildings - little owl and barn owl. In the forest backwoods on the slopes of Kiczor * and Kyrkawica *, and perhaps also in Great Britain. Czantoria * the last capercaillies are still alive - a real ornament of these mountains. Next to them, we will meet hazel grouses, and in the lower groves and mid-field thickets - quite common pheasants. The nutcracker is quite common in mountain forests, jay, great tit and crested tit. The ring thrush and several species of woodpeckers are much rarer, revealing their presence by loud knocking and piles of split cones under some trees. The spruce forests are home to a siskin and a tiny mice rabbit, and in the years of abundant fruiting of spruces, flocks of spruce crossbones appear in them, feeding on spruce cones. We will meet wagtails by the waters: gray and mountainous. An increasingly rare sight is the smooth running underwater of mountain streams, and an exceptional rarity - a colorful kingfisher, waiting for prey on a twig suspended above the water. In the lower areas, in the groves, field bushes and gardens, there are numerous birds from the warblers families, flycatchers, sikor i inne.

Among the reptiles - the viviparous lizard reaches the highest peaks of the region. The sand lizard is also quite common in the lower elevations, found on sunny slopes and dry meadows and a legless relative of lizards - slowworm. You pn. at the foot of the range, between Třinec and Ustroń *, it is also possible to meet the green lizard - the only certain information about the occurrence of this species in Poland comes from the area of ​​Ustroń. Less and less you can see - still unnecessarily exterminated - the Zigzag Viper, and in the lower positions, especially near the waters - the grass snake.

Of the amphibians - the most beautiful and often seen on wet days is the spotted salamander, the color of which is not much inferior to the brightly colored frog - the toad. Common toad and common frog are common, while in the clean, The mountain newt breeds in the cool waters of the streams.

The fauna of rivers and streams should be mentioned separately. The entire area is the land of the brown trout, occurring in large numbers in all watercourses, in large part, however, thanks to the stocking of these waters: Archduke hatcheries existed in this area (m.in. in the Vistula *) already in the second half of the 19th century. Next to the brown trout, we will meet the bullhead here, river minnow and rainbow trout introduced artificially. In the lower, bleak lives in calmer waters, jelec and brzanka.

Wonderful butterflies were destroyed in this area: niepylak apollo i niepylak mnemozyna. The same fate befell the beautiful beetles: great capricorn, associated with the old beech forests alpine forest and golden runner. To the most beautiful, but also the rare butterflies of the Silesian Beskids. there is a page of the queen and an even rarer page of a sailor, associated with blackthorn bushes on the hills of the North. at the foot of the range. Butterflies from the rusalk family and many species of night butterflies are quite common to this day. Among the beetles, the stag beetle should also be mentioned, listed, among others. from Ustroń * and Istebna *. Numerous species of ants living here should be especially cared for, which constitute an important link in the natural protection of forests.