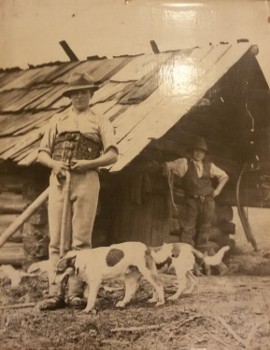 In addition to the natural settlement stream, washing in the Silesian Beskids from the plains, northern regions of Cieszyn Silesia and western Lesser Poland, appeared in the area in question in the first half of the 16th century. second, extremely important element. They were Wallachians, in Silesia called Wałachy, originating from the mountainous areas of the Balkan Peninsula. They were professional shepherds, living only on the breeding of "Wałasz cattle" - sheep and goats, and from the processing of products from this culture: milk, wool and leather. In constant search of new pastures, Wallachians wandered north and west along the ridge of the Carpathians, blending gradually with the local population yes, that they came to the Silesian Beskids as completely assimilated people, who speaks Polish. Some of them soon traveled further west, all the way to Moravia, giving rise to the so-called. Moravian Wallachia (Czech. Valassko) in the basin of Górna Beczwa. The others, on the other hand, scattered around the mountainous corners of the Duchy of Cieszyn, finding there favorable conditions for grazing their flocks.

In the initial period, the Wallachians, after each grazing season, went with their cattle from the mountains to wintering grounds located in the forests at the foot of the Beskidy Mountains - to the area to the north. from Cieszyn, Skoczów and Jasienica. At the end of the 16th century. both in Cieszyn Silesia, and in the neighboring Żywiec region, Wołochs were forced to settle permanently near their pastures. In many regions of the Beskidy Mountains, Wołosi created a number of mountain settlements, soon elevated to the rank of a village governed by a specific law, called Wallachian. Over time, settlers from outside the Wallachian mainstream also settled in these villages. In the Duchy of Cieszyn, the newcomers did not establish any independent village, however, they actively participated in the colonization of the Beskid clusters, creating new hamlets of already existing villages.

And you, and there, however, the Wallachians radically changed the economic life of the village, both old ones, as well as newly founded ones. These transformations were accompanied by changes in the lifestyle of the inhabitants, in naming, outfit and habits. The newcomers introduced, above all, shacking - pastoral farming in its original form adapted to mountain areas, much more profitable here than field crops. Soon all mountain villages converted to this form of economy, especially, that the owner of the woods, i.e.. administration of the princely estate in Cieszyn, at that time, he used forest areas to a minimum and, for appropriate fees, he willingly allowed cattle to graze within them.

Shackling companies were established on the slopes and crests of the mountains surrounding the villages, with a few or a dozen members, each of them brought a dozen or several dozen sheep. Urbarz z 1647 r. gives, that 11 villages, including. Istebna * and Wisła *, had then already 30 huts in the mountains around the valleys of the Olza * and the Vistula *, a w nich ponad 10 thousand. heads of "Wałasz cattle", mostly sheep, and 858 head of cattle. Not counted over here 1,5 thousand. head of cattle and 4 thousand. sheep, which highlanders grazed outside the huts, in the meadows leased from the prince.

In the spring, the Wallachians held their "group", that is, a meeting with the participation of the Voivode of Wallachia, forester and gamekeepers, where grazing areas were divided according to the number of cattle. After the cattle were driven to the mountains, foresters with the voivode and gamekeepers made an inventory of pastures "by nature", then took place at the Cieszyn castle ,description, where each Wałach stated the amount of cattle grazed ", entered into special registers. Duties from grazed cattle, partly in money, partly in kind, was collected by the voivode and handed over to the prince.

The voivode initially held his office on the basis of an election by the entire "Wałaska community", i.e.. all members of the shell companies in the designated ward. His social and material position was initially significant - he enjoyed many concessions and privileges. He chaired the so-called. "Rokom Wałaski" - the courts, which took place in the Duchy of Cieszyn 2 times a year and solved all problems related to craziness. In addition to the annual sheep "show", he was also obliged to supervise and protect forests. Its seat was originally the Kameralna Ligotka at the foot of Godula, and then Nawsie *. According to tradition, the voivodes were also in Bukowiec * and Wisła *. With time, the importance of voivodes began to decline. They first became officials, appointed by the property owners, during the 18th century. their role was diminishing, and in the next century we no longer meet this function.

Cattle set off for the mountains in May, "How trees get leaves": on St.. Jana Nepomucena (16.V), and to the higher pastures - to St.. Urbana (25.V). As mentioned before 60 years Paweł Zawada from Istebna * "... it was a solemn celebration, because everything from old people to children went to Sage. There were "flasks", there was a fence with tin, baskets were put up, and then "Salashnik mixed" sheep ", which was connected with many rites, to ensure good grazing and an abundance of cheese. Then the first milking and measurement of the milk took place. Then the cattle were driven to pasture, while the youth organized games and dances in the clearing, the old ones were marking the order of keeping watch again. Several days were watched for "losses", t.j. gifts for Mr.. forest inspector, farorza, lawyer, fojta etc.. Then the gazdas watched one by one, who had a cow in a shelter, goat and 7 sheep, that is the amount of cattle needed per 1 day”.